Humans almost wiped out 70,000 years ago

The Maya believed humanity had been nearly wiped out multiple times throughout history. Many of their prophecies about the future were concerned with events such as famines, pandemics, warfare and meteor strikes that could cause mass casualties to humans. I discuss these prophecies in my book Mayan Calendar Prophecies: Predictions for 2012-2052. The latest scientific research backs up the Mayan belief that humanity has come close to extinction in the past. Read the article below and learn about the Toba Volcano super-eruption that nearly ended our presence on the planet 70,000 years ago. 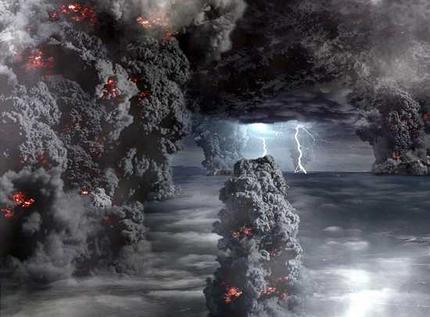 The Toba supereruption (Youngest Toba Tuff or simply YTT[1]) was a supervolcanic eruption that occurred some time between 69,000 and 77,000 years ago at Lake Toba (Sumatra, Indonesia). It is recognized as one of the Earth’s largest known eruptions. The related catastrophe theory holds that this event plunged the planet into a 6-to-10-year volcanic winter and possibly an additional 1,000-year cooling episode. This change in temperature resulted in the world’s human population being reduced to 10,000 or even a mere 1,000 breeding pairs, creating a bottleneck in human evolution.

The Toba event is the most closely studied supereruption. In 1993, science journalist Ann Gibbons first suggested a link between the eruption and a bottleneck in human evolution. Michael R. Rampino of New York University and Stephen Self of the University of Hawaii at Manoa quickly lent their support to the idea. The theory was further developed in 1998 by Stanley H. Ambrose of the University of Illinois at Urbana-Champaign.

The Toba eruption or Toba event[2] occurred at what is now Lake Toba about 73,500±3,000 yr[3] or 73,000±4,000 yr[4] ago. The Toba eruption was the latest of the three major eruptions which occurred at Toba in the last 1 million years.[5] The last eruption had an estimated Volcanic Explosivity Index of 8 (described as “mega-colossal”), or magnitude ? M8; it thus made a sizeable contribution to the 100 × 30 km2 caldera complex.[6] Dense-rock equivalent estimates of eruptive volume for the eruption vary between 2,000 km3 and 3,000 km3, but the most frequently quoted DRE is 2,800 km3 (about 7×1015 kg) of erupted magma, of which 800 km3 was deposited as ash fall.[7] It was two orders of magnitude greater in erupted mass than the largest volcanic eruption in historic times, in 1815 at Mount Tambora in Indonesia, which caused the 1816 “Year Without a Summer” in the northern hemisphere.[8]

Although the Toba eruption took place in Indonesia, it deposited an ash layer approximately 15 centimetres thick over the entirety of South Asia. A blanket of volcanic ash was also deposited over the Indian Ocean, and the Arabian and South China Sea.[9] Deep-sea cores retrieved from the South China Sea extended the known distribution of the eruption and suggest that the 2,800 km3 calculation of the eruption magnitude is a minimum value or even an underestimate.[10]

The apparent coincidence of the eruption with the onset of the last glacial period attracted the scientists’ interest. Michael L. Rampino and Stephen Self argued that the eruption caused a “brief, dramatic cooling or ‘volcanic winter'”, which resulted in a global mean surface temperature drop of 3–5°C and accelerated the glacial transition from warm to cold temperatures of the last glacial cycle.[11] Zielinski showed Greenland ice core evidence for a 1,000-year cool period with low ?18O and increased dust deposition immediately following the eruption. He further suggested that this 1,000-year cool period (stadial) could have been caused by the eruption, and that the longevity of the Toba stratospheric loading may account at least for the first two centuries of the cooling episode.[12] Rampino and Self believe that global cooling was already underway at the time of the eruption, but the procedure was extremely slow; YTT “may have provided the extra ‘kick’ that caused the climate system to switch from warm to cold states.”[13] Oppenheimer discounts the arguments that the eruption triggered the last glaciation,[14] but he accepts that it may have been responsible for a millennium of cool climate prior to the Dansgaard-Oeschger event.[15]

According to Alan Robock,[16] the Toba incident did not initiate an ice age. Using an emission of 6,000 million tons of sulphur dioxide, his simulations demonstrated a maximum global cooling of around 15°C, approximately three years after the eruption. As the saturated adiabatic lapse rate is 4.9°C/1,000 m for temperatures above freezing,[17] this means that the tree line and the snow line were around 3,000 m (9,900 ft) lower at this time. Nevertheless, the climate recovered over a few decades. Robock found no evidence that the 1,000-year cold period seen in Greenland ice core records was directly generated by the Toba eruption. Nevertheless, he argues that the volcanic winter would have been colder and longer-lasting than Ambrose assumed, which strengthens his argument for a genetic bottleneck. Contrary to Robock, Oppenheimer believes that estimates of a surface temperature drop of 3–5°C after the eruption are probably too high; a figure closer to 1°C appears more realistic.[18] Robock criticized Oppenheimer’s analysis, arguing that it is based on simplistic T-forcing relationships.[19]

Despite the different approaches and estimates, scientists agree that a supereruption like the one at Lake Toba must have led to very extensive ash-fall layers and injection of noxious gases into the atmosphere, having severe worldwide effects on climate and weather.[20] Additionally, the Greenland ice core data display an abrupt climate change around this time,[21] but there is no consensus that the eruption directly generated the 1,000-year cold period seen in Greenland or triggered the last glaciation.[22]

Ann Gibbons first suggested, in an article in the October 1993 edition of Science, that a bottleneck in human evolution about 50,000 years ago could be linked to the Toba eruption.[23] Rampino and Self backed up this idea in a letter to the journal later that year.[24] The bottleneck theory was then further developed by Ambrose in 1998 and Rampino & Ambrose in 2000, who invoked the Toba eruption to explain a severe culling of the human population.[25]

According to the supporters of the genetic bottleneck theory, between 50,000 and 100,000 years ago, human population suffered a severe population decrease—only 3,000 to 10,000 individuals survived—followed eventually by rapid population increase, innovation, progress and migration.[26] Several geneticists, including Lynn Jorde and Henry Harpending have proposed that the human race was reduced to approximately five to ten thousand people.[27] Genetic evidence suggests that all humans alive today, despite apparent variety, are descended from a very small population, perhaps between 1,000 to 10,000 breeding pairs about 70,000 years ago.[28] Note that this is an estimate of ancestors, not of total human population. Isolated pockets of humans who eventually died out without descendants may have also existed in numbers that cannot be reliably estimated by geneticists.

Ambrose and Rampino proposed in the late 1990s that a genetic bottleneck could have been caused by the climate effects of the Toba eruption. The supporters of the Toba catastrophe theory suggest that the eruption resulted in a global ecological disaster with extreme phenomena, such as worldwide vegetation destruction, and severe drought in the tropical rainforest belt and in monsoonal regions. ?his massive environmental change created population bottlenecks in species that existed at the time, including hominids;[29] this in turn accelerated differentiation of the reduced human population. Therefore, Toba may have caused modern races to differentiate abruptly only 70,000 years ago, rather than gradually over one million years.[30] Robock believes that, indeed, a 10-year volcanic winter triggered by YTT could have largely destroyed the food supplies of humans and therefore caused a significant reduction in population sizes.[31]

Gene analysis of some genes shows divergence anywhere from 60,000 to 2 million years ago. This does not contradict the Toba theory, however, because Toba is not conjectured to be an extreme bottleneck event. The complete picture of gene lineages, including present-day levels of human genetic variation, allows the theory of a Toba-induced human population bottleneck.[32]

However, research by archaeologist Michael Petraglia’s team cast doubt on Ambrose’s theory. Petraglia and his team found stone tools in southern India, above and below a thick layer of ash from the Toba eruption. The tools from each layer were remarkably similar, and Petraglia says that this shows that the huge dust clouds from the eruption did not wipe out the local population of people:[33]

Whoever was there seems to have persisted through the eruption.

A 2009 study by Martin A. J. Williams’s team challenges Petraglia’s findings. Williams analysed pollen from a marine core in the Bay of Bengal with stratified Toba ash, and argued that the eruption caused prolonged deforestation in South Asia. Ambrose, who is a co-author of the study, calls the evidence “unambiguous”, and further argues that YTT may have forced our ancestors to adopt new survival strategies, which permitted them to replace Neanderthals and “other archaic human species”.[34] However, both Neanderthals in Europe and the small-brained Homo floresiensis in Southeastern Asia survived YTT by 50,000 and 60,000 years respectively.[35]

Oppenheimer accepts that the arguments proposed by Rampino and Ambrose are plausible, but they are not yet compelling for two reasons: it is difficult to estimate the global and regional climatic impacts of the eruption, and, at the same time, we cannot conclude with any confidence that the eruption actually preceded the bottleneck.[36] Furthermore, a 2010 geneticists’ study seems to question the foundations of the Toba bottleneck theory: analysis of Alu sequences across the entire human genome has shown that the effective human population was already less than 26,000 as far back as 1.2 million years ago, suggesting that no Toba bottleneck was necessary. Possible explanations for the low population size of human ancestors may include repeated population bottlenecks or periodic replacement events from competing Homo subspecies.[37]

Alan Rogers, a co-author of this study and professor of anthropology at the University of Utah, says: “The record of our past is written in our parasites.” Rogers and others have proposed the bottleneck may have occurred because of a mass die-off of early humans due to a globally catastrophic volcanic eruption. The analysis of louse genes confirmed that the population of Homo sapiens mushroomed after a small band of early humans left Africa sometime between 150,000 and 50,000 years ago.[38]

Recent research states that genetic diversity in the pathogenic bacterium Helicobacter pylori decreases with geographic distance from East Africa, the birthplace of modern humans. Using the genetic diversity data, the researchers have created simulations that indicate the bacteria seem to have spread from East Africa around 58,000 years ago. Their results indicate modern humans were already infected by H. pylori before their migrations out of Africa, and H. pylori remained associated with human hosts since that time.[39]

Genetic bottlenecks of other mammals

The population of the Eastern African chimpanzee,[40] Bornean orangutan,[41] central Indian macaque,[42] the cheetah, the tiger,[43] and the separation of the nuclear gene pools of eastern and western lowland gorillas,[44] all recovered from very low numbers around 70,000–55,000 years ago.

It is currently not known where human populations were living at the time of the eruption. The most plausible scenario is that all the survivors were populations living in Africa, whose descendants would go on to populate the world. However, recent archeological finds, mentioned above, have suggested that a human population may have survived in Jwalapuram, Southern India.[45]

Recent analyses of mitochondrial DNA have set the estimate for the major migration from Africa from 60,000–70,000 years ago,[46] around 10–20,000 years earlier than previously thought, and in line with dating of the Toba eruption to around 66,000–76,000 years ago. During the subsequent tens of thousands of years, the descendants of these migrants populated Australia, East Asia, Europe, and finally the Americas.

It has been suggested that nearby hominid populations, such as Homo erectus soloensis on Java, and Homo floresiensis on Flores, survived because they were upwind of Toba.[47]