Iron Jewelry in Egyptian Tomb Proof of 3300 BC Impact Event? 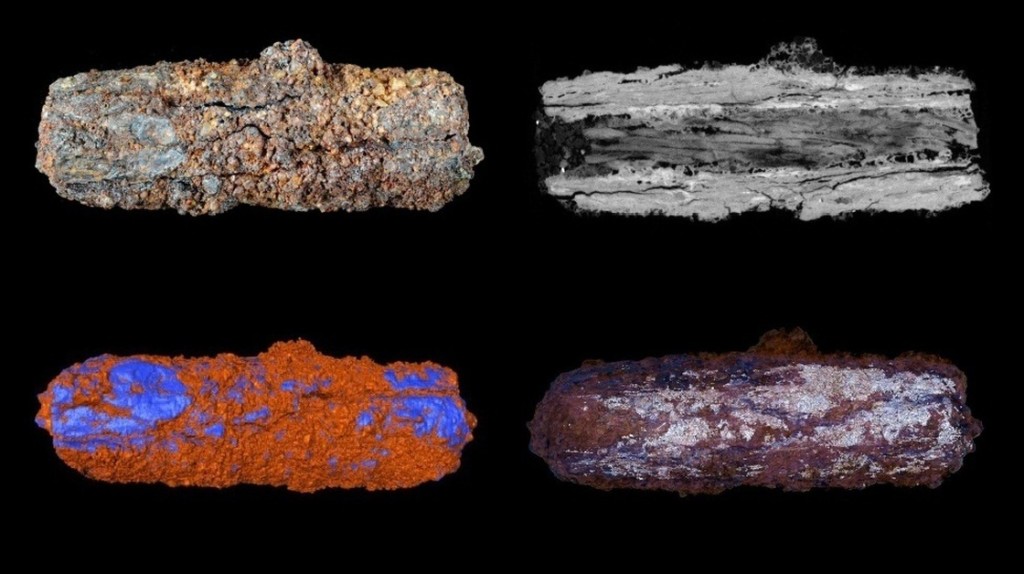 The metal in an Egyptian iron bead dating from around 3,300 BC has been found to have originated from space, according to analysis. Here, the bead is seen in (clockwise from top left) a photograph, a CT cross-section view, a model of nickel oxides, and a model in which blue areas represent the rich presence of nickel inside the bead.

According to an inscription in Temple XIX at the Mayan site of Palenque, a catastrophic event occurred around 3300 BC. In my book, Mayan Calendar Prophecies, I argued that this event sounded remarkably like a meteor impact event. Now scientists have found jewelry in Egyptian tombs made from meteoric iron that dates to, you guessed it– 3300 BC. Coincidence? Read the story below and decide for yourself:

The 5,000-year-old iron bead might not look like much, but it hides a spectacular past: researchers have found that an ancient Egyptian trinket is made from a meteorite.

The result, published on 20 May in Meteoritics & Planetary Science1, explains how ancient Egyptians obtained iron millennia before the earliest evidence of iron smelting in the region, solving an enduring mystery. It also hints that they regarded meteorites highly as they began to develop their religion.

“The sky was very important to the ancient Egyptians,” says Joyce Tyldesley, an Egyptologist at the University of Manchester, UK, and a co-author of the paper. “Something that falls from the sky is going to be considered as a gift from the gods.”

The tube-shaped bead is one of nine found in 1911 in a cemetery at Gerzeh, around 70 kilometres south of Cairo. The cache dates from about 3,300 bc, making the beads the oldest known iron artefacts from Egypt.