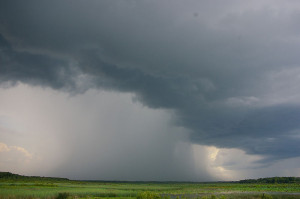 Evidence is mounting that something catastrophic happened on Earth around 2300 BC. Recent genetic research has revealed that ancient Europeans vanished from the continent around 2500 BC (give or take a couple hundred years.) Several temples at the Mayan site of Palenque record catastrophic events occuring around 2300 BC as well. The description of the event in the Mayan temples at Palenque sound remarkably like an impact event. Researcher M.M. Mandelkehr in his three volume series, The 2300 BC Event, argued that it was, indeed, a meteor impact that devastated Earth at this time. And now the latest research has shown that Ireland experienced a twenty year period of non-stop rainfall at this time as well. The researchers theorized that volcanic activity was to blame for this weather anomaly but could it have actually been the result of an impact event? The researchers noted that a similar ‘great rain’ lasting 10 years occurred around 540 AD. Multiple researchers including myself have argued that an impact event occurred in 540 AD as well. Thus the evidence appears to support an impact event as the cause behind both ‘great rains’ as opposed to a volcanic event. Read more about the evidence of this ‘great rain’ below:

DID YOU KNOW that Ireland experienced non-stop rain for 20 years?

While our less-than-brilliant weather may make this feel like a very recent event, it actually happened way back in 2345BC.

According to evidence uncovered in this Sunday’s ‘Secret’s of the Irish Landscape’ programme on RTÉ One, this period of non-stop rainfall makes it possible that the biblical story of Noah’s great flood really did happen.

Professor Mike Baillie from Queen’s University in Belfast has proven that the 20-year flood coincided with the traditional date for Noah’s flood.
“According to the ancient Annals of the Four Masters, the whole of Ireland had to be evacuated at this time,” Baillie said. “We believe this global event was caused by a big explosive volcanic eruption which loaded the atmosphere with dust to reflect the sunlight away and cause widespread cooling at the earth’s surface.”

Baillie has also discovered that freak weather events such as these tend to happen every thousand years or so.
With Ireland experiencing its last one in 540AD – when it rained for 10 years straight – the downpour to end all downpours is long overdue.