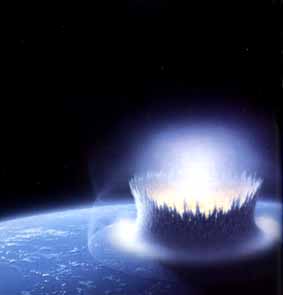 The Anglo-Saxon Chronicle states that in England 1014 AD, on the eve of St. Michael’s day (September 28, 1014) “came the great sea-flood, which spread wide over this land, and ran so far up as it never did before, overwhelming many towns, and an innumerable multitude of people.” This is clearly a reference to a tsunami similar to the one that struck Indonesia in December 2004 which killed over 250,000 people.

What could have caused this tsunami? Could a meteor or comet impact in the Atlantic Ocean have been the cause? Researcher Dallas Abbott of the Lamont Doherty Earth Observatory at Columbia University discovered material in a bog at Black Rock Forest in Cornwall, New York that “is difficult to explain except with an impact event.” This material included impact glass and spherules that can only be created by the forces associated with a meteor or comet impact as well as marine sediments and fossils that were determined to have come from the mid-Atlantic ridge, over 3800 kilometers from Black Rock Forest. Abbott noted that “because these locations are so far away from Black Rock Forest, the only viable method for transporting the material to Black Rock Forest is an impact event.”

In other words, the evidence suggests that a comet or meteor slammed into the middle of the Atlantic Ocean and ejected material from the bottom of the ocean which flew over 3800 kilometers and landed in the bog at Black Rock Forest in New York. The material at Black Rock was dated to around 1014 AD. Abbott also noted that such an impact event would have also created a tsunami that would’ve radiated out in all directions from the point of impact thus she began looking for evidence of such a tsunami. 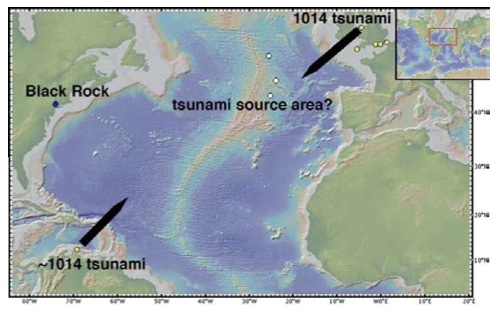 In addition to the afore-mentioned tsunami in England on September 28, 1014 Abbott also found tsunami deposits in the Lesser Antilles in the Caribbean that also dated to around 1014 AD. By noting the angle of the tsunami deposits in both England and the Lesser Antilles, Abbott was able to deduce the probable location of the impact in the middle of the Atlantic Ocean. This also shows that the tsunami impacted the coastlines on both sides of the Atlantic and thus affected millions of people living along those coasts. This is likely the origins of the Aztec myth relating to the destruction of the Fourth Sun by a flood around 1011 AD as recorded on the Aztec Calendar Stone.

Abbott also noted there was a “prominent ammonium anomaly,” i.e., an increase in ammonia in the atmosphere, as represented in Antarctic ice core data associated with the year 1014 AD. This same spike in atmospheric ammonia can be seen associated with two other known impact events: Tunguska, Russia on June 30, 1908 and the Brazilian Tunguska of August 13, 1930. This provides more supporting evidence for an impact event in 1014 AD.

The date of the tsunami, falling on the eve of St. Michael’s Day, is also interesting. The legends surrounding the Biblical character of Michael sound very reminiscent of an impact event:

If the “dragon” was a comet and his “angels” were fragments of the comet as it broke up in the atmosphere then the story is a perfect metaphor for an impact event. Yet this passage from the book of Revelation was written over 2,000 years ago, a thousand years BEFORE the impact event of 1014 AD. So why was September 28 already associated with Michael? This suggests that Earth has experienced a previous cosmic impact on September 28 during a previous era which was the basis of the story in Revelation and the reason the date was devoted to Michael, the hero of the impact allegory. Thus could there be a predictable cycle of such impacts? Instead of viewing the ancient writings as prophecies could they be closer to forecasts based on a predictable cycle?