Acidification May Push Already Over-Stressed Oceans into the Red

The Mayan predictions for 2012 include references to famine for the second half of the 20 year “katun 2 ahau” cycle that begins in 2012. Thus the years 2012-2022 should be normal but the years 2022-2032 may be a time of starvation. This news article on a U.N. report seems to support the famine prediction. Learn more about these predictions in my book Mayan Calendar Prophecies: Predictions for 2012-2052 (hardcover, paperback, kindle e-book) 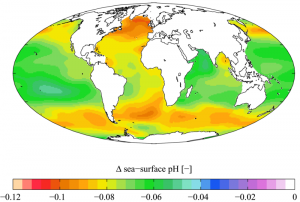 (CNN) — The chemistry of the world’s oceans is changing at a rate not seen for 65 million years, with far-reaching implications for marine biodiversity and food security, according to a new United Nations study released Thursday.
“Environmental Consequences of Ocean Acidification,” published by the U.N. Environmental Program (UNEP),” warns that some sea organisms including coral and shellfish will find it increasingly difficult to survive, as acidification shrinks the minerals needed to form their skeletons.
Lead author of the report Carol Turley, from the UK’s Plymouth Marine Laboratory said in a statement: “We are seeing an overall negative impact from ocean acidification directly on organisms and on some key ecosystems that help provide food for billions. We need to start thinking about the risk to food security.”
Tropical reefs provide shelter and food for around a quarter of all known marine fish species, according to the U.N. report, while over one billion people rely on fish as a key source of protein.