The last tracts of farm land in Africa are being gobbled up by investors to help feed Earth’s growing population. Where will we grow the food to feed even more people as Earth’s population continues to grow? As supplies of farmland decrease, the price will only increase which will drive up the price of food. The Maya Katun Prophecies in their books called Chilam Balam predicted a famine for the second half of the 20 year period starting in 2012 (i.e, between 2022-2032.) The news story below seems to support this prediction. (Learn more about these predictions in my book Mayan Calendar Prophecies: Predictions for 2012-2052.) 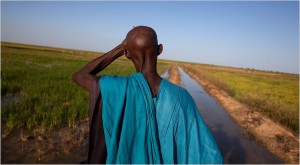 SOUMOUNI, Mali — The half-dozen strangers who descended on this remote West African village brought its hand-to-mouth farmers alarming news: their humble fields, tilled from one generation to the next, were now controlled by Libya’s leader, Col. Muammar el-Qaddafi, and the farmers would all have to leave. “They told us this would be the last rainy season for us to cultivate our fields; after that, they will level all the houses and take the land,” said Mama Keita, 73, the leader of this village veiled behind dense, thorny scrubland. “We were told that Qaddafi owns this land.” Across Africa and the developing world, a new global land rush is gobbling up large expanses of arable land. Despite their ageless traditions, stunned villagers are discovering that African governments typically own their land and have been leasing it, often at bargain prices, to private investors and foreign governments for decades to come. Organizations like the United Nations and the World Bank say the practice, if done equitably, could help feed the growing global population by introducing large-scale commercial farming to places without it. But others condemn the deals as neocolonial land grabs that destroy villages, uproot tens of thousands of farmers and create a volatile mass of landless poor. Making matters worse, they contend, much of the food is bound for wealthier nations. “The food security of the country concerned must be first and foremost in everybody’s mind,” said Kofi Annan, the former United Nations secretary general, now working on the issue of African agriculture. “Otherwise it is straightforward exploitation and it won’t work. We have seen a scramble for Africa before. I don’t think we want to see a second scramble of that kind.” [The article continues at: http://www.nytimes.com/2010/12/22/world/africa/22mali.html]