Air Force to Share Its Info on Planet-Flattening Meteorites

According to Mayan and Aztec beliefs, the world has been destroyed four or five times in the past. The description of these events bear striking resemblance to impact events. Did the Maya and Aztecs record eye-witness accounts of asteroids or comets smashing into Earth and resetting civilizations back to a zero point each time? How often do such events really happen? Will the end of the current Mayan calendar coincide with another such event? I explore these topics in my book Mayan Calendar Prophecies: Predictions for 2012-2052. The latest information released by the U.S. Air Force should help answer these questions. Read the story below: 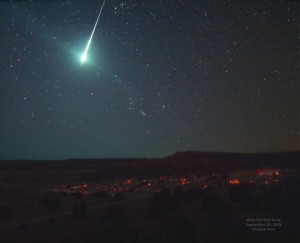 Sixty-five million years ago a five-mile wide meteorite smashed into the Earth, wreaking havoc on weather patterns and possibly hastening the extinction of the dinosaurs. In June 1908, a somewhat smaller space rock exploded over a luckily uninhabited Tunguska, Siberia, flattening trees and killing reindeer over a nearly 10-mile radius. “The fire was brighter than the sun,” one eyewitness claimed.

These planet-altering meteorites were once thought quite rare. Then came the Cold War. The U.S. Air Force filled Earth orbit with sophisticated satellites meant to spot nuclear tests and missile launches. The satellites, it turned out, were also quite good at detecting the explosions — the official term is “bolide” — of meteorites like that over Tunguska. We now know they occur as frequently as several times a year. Over the decades, the military has periodically released brief reports on bolides and the other effects of so-called Near-Earth Objects. Today, for the first time, the Air Force is considering openly sharing this vital intel in a systematic way.

There are clear scientific reasons for better data-sharing. “From past experience working with U.S. government satellite data, the information provided is unmatched by any other data source and allows scientific analyses which are otherwise impossible,” Peter Brown told Space.com. But never mind all that. Planet Earth’s safety is at stake. This isn’t national security. It’s global security. “Data from NEO air-burst events observed by the U.S. Department of Defense satellites should be made available to the scientific community to allow it to improve understanding of the NEO hazards to Earth,” stated a report from the National Research Council.

[The story continues at: http://www.wired.com/dangerroom/2010/12/air-force-to-share-intel-on-planet-flattening-meteorites/ ]