Ancient Europeans Vanished Around 2500 BC 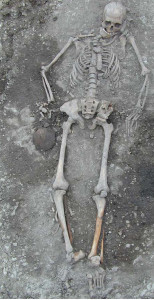 According to Mayan “mythology”, i.e., ancient historical texts, Earth has undergone multiple catastrophes over the ages. Descriptions of these events sound remarkably like meteor bombardments. Scientists studying meteor impact events have noted that one such bombardment appears to have occurred around 2400 BC. Now new evidence from geneticists have shown that something drastic happened to Europe’s population at this time. In fact, the original population appears to have vanished to then be replaced by migrants from elsewhere. Is this further evidence of a meteor bombardment at this time? Read the story below to learn more:

The genetic lineage of Europe mysteriously transformed about 4,500 years ago, new research suggests.

The findings, detailed today (April 23) in the journal Nature Communications, were drawn from several skeletons unearthed in central Europe that were up to 7,500 years old.

“What is intriguing is that the genetic markers of this first pan-European culture, which was clearly very successful, were then suddenly replaced around 4,500 years ago, and we don’t know why,” said study co-author Alan Cooper, of the University of Adelaide Australian Center for Ancient DNA, in a statement. “Something major happened, and the hunt is now on to find out what that was.”

One Response to "Ancient Europeans Vanished Around 2500 BC"