Bees in freefall as study shows sharp US decline 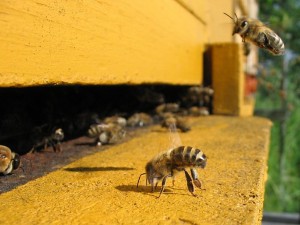 As I noted in my book Mayan Calendar Prophecies: Predictions for 2012-2052, the Maya predicted that a disease would kill many beehives between the years 1993-2012. Colony Collapse Disorder (CCD) was first discovered killing entire beehives in 1996. It now seems the mysterious disease is getting worse. If the bees die, we starve since there’s no way humans can hand pollinate all the species of plants we eat that require bees! Add to this all the other research about crops failing to feed the world’s population, failures of genetically modified crops, the collapse of ocean fisheries, etc., and you have a perfect storm in the making. Could the Mayan prediction of a famine between the years 2022-2032 be accurate? Read the article below:

The abundance of four common species of bumblebee in the US has dropped by 96% in just the past few decades, according to the most comprehensive national census of the insects. Scientists said the alarming decline, which could have devastating implications for the pollination of both wild and farmed plants, was likely to be a result of disease and low genetic diversity in bee populations.

Bumblebees are important pollinators of wild plants and agricultural crops around the world including tomatoes and berries thanks to their large body size, long tongues, and high-frequency buzzing, which helps release pollen from flowers.

Bees in general pollinate some 90% of the world’s commercial plants, including most fruits, vegetables and nuts. Coffee, soya beans and cotton are all dependent on pollination by bees to increase yields. It is the start of a food chain that also sustains wild birds and animals.

But the insects, along with other crucial pollinators such as moths and hoverflies, have been in serious decline around the world since the last few decades of the 20th century. It is unclear why, but scientists think it is from a combination of new diseases, changing habitats around cities, and increasing use of pesticides.

Sydney Cameron, an entomologist at the University of Illinois, led a team on a three-year study of the changing distribution, genetic diversity and pathogens in eight species of bumblebees in the US.

By comparing her results with those in museum records of bee populations, she showed that the relative abundance of four of the sampled species (Bombus occidentalis, B. pensylvanicus, B. affinis and B. terricola) had declined by up to 96% and that their geographic ranges had contracted by 23% to 87%, some within just the past two decades.

Cameron’s findings reflect similar studies across the world. According to the Centre for Ecology and Hydrology in the UK, three of the 25 British species of bumblebee are already extinct and half of the remainder have shown serious declines, often up to 70%, since around the 1970s. Last year, scientists inaugurated a £10m programme, called the Insect Pollinators Initiative, to look at the reasons behind the devastation in the insect population.