Did a massive starquake near the galactic center cause the 2004 Indonesian earthquake and associated tsunami which killed nearly 300,000 people? One researcher thinks this is precisely the case. He argues that the energy or gamma ray burst released from the star was preceded by a significant gravity wave which arrived at Earth at the same time as the Indonesian earthquake that caused the tsunami. Could such an event be what the Mayan prophecies predicted for 2012? Some researchers have theorized that the Maya chose the end date of December 21, 2012 for their calendar because it coincides with an alignment between the earth, winter solstice sun, and galactic center. Did they do this to warn us of destruction that could come from that direction in the sky? I discuss that possibility in my book Mayan Calendar Prophecies: Predictions for 2012-2052. Read the article below and decide for yourself. 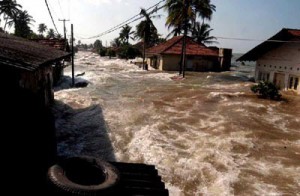 Was the December 26, 2004 Indonesian Earthquake and Tsunami Caused by a Stellar Explosion 26,000 Light Years Away?

On December 26, 2004 a magnitude 9.3 earthquake occurred in the Indian Ocean off the coast of Sumatra in Malaysia. It caused a powerful tsunami which devastated coastal regions of many countries leaving over 240,000 people either dead or missing. It was the worst tsunami to affect this area since the 1883 explosion of Krakatao. The earthquake that produced it was so strong that it exceeded by a factor of 10 the next most powerful earthquake to occur anywhere in the past 25 years.

It is then with some alarm that we learn that just 44.6 hours later gamma ray telescopes orbiting the Earth picked up the arrival of the brightest gamma ray burst ever recorded!

This gamma ray blast was 100 times more intense than any burst that had been previously recorded, equaling the brightness of the full Moon, but radiating most of its energy at gamma ray wavelengths. Gamma ray counts spiked to a maximum in 1.5 seconds and then declined over a 5 minute period with 7.57 second pulsations. The blast temporarily changed the shape the Earth’s ionosphere, distorting the transmission of long-wavelength radio signals.

What makes the December 27th gamma ray burst unique is that it is the first time that a burst this bright has been observed, one that also happens to originate from within our own Galaxy.

Astronomers have theorized that gamma ray bursts might travel in association with gravity wave bursts. In the course of their flight through space, gamma rays would be deflected by gravitational fields and would be scattered by dust and cosmic ray particles they encountered, so they would be expected to travel slightly slower than their associated gravity wave burst which would pass through space unimpeded. After a 45,000 year light-speed journey, a gamma ray burst arrival delay of 44.6 hours would not be unexpected. It amounts to a delay of just one part in 9 million. So if the gravity wave traveled at the speed of light (c), the gamma ray burst would have averaged a speed of 0.99999989 c, just 0.11 millionths slower. There is also the possibility that at the beginning of its journey the gravity wave may have had a superluminal speed;

Many have inquired if there might be a connection between these two events (e.g., see the Space.com article). Not thinking of the gravity wave connection, astronomers have been reluctant to admit there might be a connection since they know of no mechanism by which gamma rays by themselves could trigger earthquakes. They admit that the December 27th gamma ray burst had slightly affected the ionization state of the Earth’s atmosphere, but this by itself should not have caused earthquakes. However, if a longitudinal gravity potential wave pulse were to accompany a gamma ray burst, the mystery becomes resolved. The connection between earthquakes and gamma ray bursts now becomes plausible.

In his 1983 Ph.D. dissertation, Paul LaViolette called attention to terrestrial dangers of Galactic core explosions, pointing out that the arrival of the cosmic ray superwave they produced would be signaled by a high intensity gamma ray burst which would also generate EMP effects (e.g., see Page 3). He also noted that a strong gravity wave might be expected to travel forward at the forefront of this superwave and might be the first indication of a superwave’s arrival. He pointed out that such gravity waves could induce substantial tidal forces on the Earth during their passage which could induce earthquakes and cause polar axis torquing effects.