Did the 1859 Super Solar Storm also cause earthquakes, hurricanes & plagues? 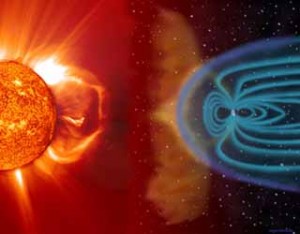 A new article connects the super solar storm of 1859 called the Carrington Event to other unusual occurrences immediately before and after the storm such as a megaquake in Turkey, a hurricane-strength super storm in the north Atlantic, and the rapid spread of a flu pandemic. (I discussed this connection between a 250-year solar cycle and the Mayan belief in a 256-year cycle that affected the rise and fall of civilizations in my new book Mayan Calendar Prophecies: Predictions for 2012-2052 available in hardback, paper back and Kindle editions.) A few quotes from the article:

As you steam by Perth on September 1, 1859 all the passengers are delighted by an incredible phenomena. It is the ‘Aurora Australis’, but one so bright it lights up the night as if it were day. The captain, Thomas Taylor, notes he has never seen an Aurora this close to the equator before.

Skies all over planet Earth erupted in red, green, and purple auroras so brilliant that newspapers could be read as easily as in daylight. On the other side of the world, a brilliant Aurora Borealis is seen as far south as the Caribbean and Hawaii. This was the largest geo-magnetic storm ever recorded (NASA). Telegraph systems all over Europe and North America failed. Telegraph pylons threw sparks and telegraph paper spontaneously caught fire. But this was only the first portent from the heavens.

Just two months earlier a massive earthquake had occurred in Erzurum, Turkey, of force 9 on the Mercalli scale. Over 16 thousand people had perished. Was there a strange connection between these two events? But even stranger coincidences were to follow.

The rest of the ‘Royal Charter’s’ journey was pure bliss. The luxury cabins were a delight. The company boisterous and the sharing of ‘wealth laden’ future dreams enervating. As she beat down towards the English Channel all seemed well. But when she reached the north-western tip of Anglesey, on October 25, the barometer was dropping. The master, Captain Thomas Taylor, was advised to put into Holyhead harbor for shelter but he continued on to Liverpool.

During the night of October, the winds rose to Hurricane force 12 at over 160 kmh, in what became known as the ‘Royal Charter’ gale. Its direction changed from E to NNE, driving the ship towards the coast of Anglesey.

Not only were there megaquakes and super storms associated with this super solar storm but also a flu pandemic suggesting it somehow aided viral growth:

In the heavens, the solar superstorm of 1859, also known as the ‘Carrington Event’, was the most powerful solar storm in recorded history. Richard Carrington sketched its magnitude whilst observing the bright flashes of a solar flare on the surface of the sun.

This was the same event that caused the disruption of telegraphs, the extreme glow of the Aurora Australis, earthquakes in Turkey, and finally the massively destructive ‘Royal Charter’ mega-storm. Quite probably ‘synchrotron’ radiation poured down on Earth. Tempel’s observations came shortly thereafter, when he sketched an enormous Coronal Mass Ejection (CME), with its terrible body blooming out as far as the width of the sun itself, during a solar eclipse a few months later. The electromagnetic connection with the sun controls our weather, not puny mankind with his imagined impact.

One more phenomena occurred that is painfully coincidental and baffles modern science. The world wide flu epidemic of 1859 was one of the worst ever, causing half a million deaths (Duffy. J.- Louisiana University press). Could solar flares and the CME’s synchrotron radiation stimulate viral growth?

Read the full article at: http://www.thunderbolts.info/wp/2011/10/27/gold-glamour-and-destruction/