The Maya believed in a series of world ages called Suns that were each destroyed by a catastrophe. As discussed in my book Mayan Calendar Prophecies: Predictions for 2012-2052 these catastrophes seem to be impact events that resulted from comet’s exploding after being struck by super solar flares and coronal mass ejections. The fragments then collided with Earth creating a rain of fire and rock with larger fragments exploding in the atmosphere like nuclear bombs. Mayan mythology also appears to record deformities in humans associated with these events which likely resulted from genetic mutations caused by the intense solar radiation.

Normally Earth is protected by its magnetic field from direct impact by these super solar flares and coronal mass ejections but NASA recently discovered a huge hole in our protective “force field.” Our shields are literally down and any major solar flare will hit us unimpeded. Such an event would knock out the electrical infrastructure of our planet and send us back 100 years. Read the research to find out more about this new discovery: 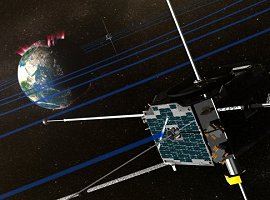 Above: One of the THEMIS probes exploring the space around Earth, an artist’s concept. [more]

Dec. 16, 2008: NASA’s five THEMIS spacecraft have discovered a breach in Earth’s magnetic field ten times larger than anything previously thought to exist. Solar wind can flow in through the opening to “load up” the magnetosphere for powerful geomagnetic storms. But the breach itself is not the biggest surprise. Researchers are even more amazed at the strange and unexpected way it forms, overturning long-held ideas of space physics.

“At first I didn’t believe it,” says THEMIS project scientist David Sibeck of the Goddard Space Flight Center. “This finding fundamentally alters our understanding of the solar wind-magnetosphere interaction.”

The magnetosphere is a bubble of magnetism that surrounds Earth and protects us from solar wind. Exploring the bubble is a key goal of the THEMIS mission, launched in February 2007. The big discovery came on June 3, 2007, when the five probes serendipitously flew through the breach just as it was opening. Onboard sensors recorded a torrent of solar wind particles streaming into the magnetosphere, signaling an event of unexpected size and importance.

“The opening was huge—four times wider than Earth itself,” says Wenhui Li, a space physicist at the University of New Hampshire who has been analyzing the data. Li’s colleague Jimmy Raeder, also of New Hampshire, says “1027 particles per second were flowing into the magnetosphere—that’s a 1 followed by 27 zeros. This kind of influx is an order of magnitude greater than what we thought was possible.”

The event began with little warning when a gentle gust of solar wind delivered a bundle of magnetic fields from the Sun to Earth. Like an octopus wrapping its tentacles around a big clam, solar magnetic fields draped themselves around the magnetosphere and cracked it open. The cracking was accomplished by means of a process called “magnetic reconnection.” High above Earth’s poles, solar and terrestrial magnetic fields linked up (reconnected) to form conduits for solar wind. Conduits over the Arctic and Antarctic quickly expanded; within minutes they overlapped over Earth’s equator to create the biggest magnetic breach ever recorded by Earth-orbiting spacecraft.

The size of the breach took researchers by surprise. “We’ve seen things like this before,” says Raeder, “but never on such a large scale. The entire day-side of the magnetosphere was open to the solar wind.”

“To the lay person, this may sound like a quibble, but to a space physicist, it is almost seismic,” says Sibeck. “When I tell my colleagues, most react with skepticism, as if I’m trying to convince them that the sun rises in the west.”

Here is why they can’t believe their ears: The solar wind presses against Earth’s magnetosphere almost directly above the equator where our planet’s magnetic field points north. Suppose a bundle of solar magnetism comes along, and it points north, too. The two fields should reinforce one another, strengthening Earth’s magnetic defenses and slamming the door shut on the solar wind. In the language of space physics, a north-pointing solar magnetic field is called a “northern IMF” and it is synonymous with shields up!

“So, you can imagine our surprise when a northern IMF came along and shields went down instead,” says Sibeck. “This completely overturns our understanding of things.”

Northern IMF events don’t actually trigger geomagnetic storms, notes Raeder, but they do set the stage for storms by loading the magnetosphere with plasma. A loaded magnetosphere is primed for auroras, power outages, and other disturbances that can result when, say, a CME (coronal mass ejection) hits.

The years ahead could be especially lively. Raeder explains: “We’re entering Solar Cycle 24. For reasons not fully understood, CMEs in even-numbered solar cycles (like 24) tend to hit Earth with a leading edge that is magnetized north. Such a CME should open a breach and load the magnetosphere with plasma just before the storm gets underway. It’s the perfect sequence for a really big event.”

Sibeck agrees. “This could result in stronger geomagnetic storms than we have seen in many years.”

A video version of this story may be found here. For more information about the THEMIS mission, visit http://nasa.gov/themis