Major catastrophe and climate change hit Earth in 3200 BC

Mayan myths say Earth once experienced a great catastrophe and they even recorded the date: 3200 BC. I discuss this ancient catastrophe and the Mayan myths that recorded it in my book Mayan Calendar Prophecies: Predictions for 2012-2052. In this book I argue that these myths record the breakup and impact of a comet with Earth which led to multiple mega-tsunamis that destroyed the coastal civilizations of the time. Such impact events would be associated with severe climate downturns astronomers Bill Napier and Victor Clube argued in their book Cosmic Winter. The latest scientific findings seem to backup these Mayan “myths.” According to scientists studying ice core data, around 3200 BC the temperature on Earth plunged. In fact, it plunged so fast that it flash-froze plants which the scientists discovered in perfect condition. It was also in 3200 BC that the Ice Man discovered in the Alps was flash-frozen thus a likely victim of the same event. With all the atmospheric water now locked in ice it led to severe droughts in the tropics. Worse still, the Maya believed this event would happen again in the future. If such an event happens again, it could be even more devastating because nearly 70% of the world’s 6 billion people live in the tropics.  Read the story below: 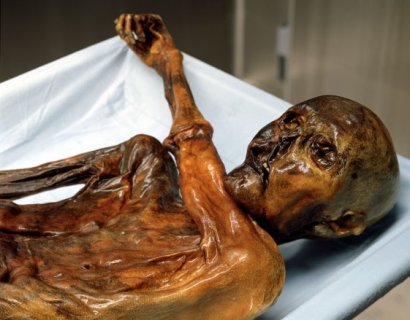 The Ice Man discovered in the Swiss Alps in 1992 died around 3200 BC. Was he a victim of the rapid climate change that occurred then?

COLUMBUS, Ohio — The latest expeditions to ice caps in the high, tropical Peruvian Andes Mountains by Ohio State University scientists may shed light on a mysterious global climate change they believe occurred more than 5,000 years ago.

They hope that ice cores retrieved from two tropical ice caps there, as well as ancient plants retrieved from beneath the retreating glaciers, may contain clues that could link ancient events that changed daily life in South America, Europe and Asia.

Something happened 5,200 years ago that was abrupt and very large-scale, explained Lonnie Thompson, professor of geological sciences at Ohio State and researcher with the Byrd Polar Research Center. As snow falls on these ice caps and is packed tightly over time, it forms stratigraphic layers indicating annual accumulations. Researchers can estimate the age of a core by counting these layers just as biologists date forests by counting tree rings.

In September, Thompson and his team returned from drilling ice cores from glaciers atop two peaks in Peru. They drilled three cores from Nevado Coropuna, a 6,425-meter (21,074-foot) extinct volcano in the Cordillera Occidental of the Andes in Southern Peru. Two of the cores were drilled at the crater rim and measured just over 34 meters (111.5 feet).

Based on our counting layers in the core at the drill site, we believe the shorter cores might date back at least 300 years, Thompson said.

The third core from coropuna was drilled directly over the crater at the mountains summit and measured 146.3 meters (479 feet). This core will likely provide the first annually resolved climate history for this region over at least the last 2,000 years.

There is a possibility that this core could contain glacial stage ice, he suspects, which could date it back more than 10,000 years.

These cores should provide a critical piece of the puzzle needed to understand climate variability in this region, Thompson said.

Coropuna is located on the first rise of the Andes, right above the Pacific Ocean, so the ice cores should record changes in the El Nino-La Nina cycle, a key component of climate variability.

Approximately 270 miles (434 kilometers) north and east of Coropuna lies the Quelccaya ice cap, a site that Thompson and his team have visited at least 18 times in the last few decades.

During this expedition, they drilled two cores from a new site on the north dome of the ice cap. They hope that the cores, measuring 128.6 meters (422 feet), will unveil an annual record of climate in this region dating back at least 1,000 years. At the ice cap summit, the team also retrieved a 168.7-meter (553-foot) core to bedrock that is expected to yield an annual record covering more than 2,000 years that will give them a high-resolution record of climatic and environmental conditions.

The deep core at the Coropuna crater site yielded other surprises. They found the body of a small insect, perfectly preserved and frozen in the ice 64 meters (210 feet) below the surface and three individual plant fragments retrieved from the 117-meter (384-foot) level in the core.

These finds are important since they will allow us to independently date the core at these levels using a different process, Thompson said. Both the insect and the plant material were probably carried from the Altiplano below to the summit site by thunderstorm winds.

This is a soft-bodied plant, he said. It had to be captured by a very large snowfall at the time, a snowfall and climate change that began very abruptly fast enough to capture a plant but not kill it. That is astounding.

We know the first plant could not have been exposed at any time during in that 5,200-year history or it would have decayed, he said.

This year, the researchers found a second plant near the southern tip of the ice field, some 6 kilometers (3.7 miles) south of their original plant find. Thompson believes that this second plant may provide important historical information about this site.

Subsequent carbon dating of the second plant showed that it had been buried for the last 2,200 years, a time when other records showed another abrupt climate change.

The size of the ice caps in this region is a vital key in understanding questions about global climate change. Since he first started monitoring Quelccaya, Thompson said the ice cap has been retreating exponentially.

When we started surveying in 1963, Quelccaya was retreating at a rate of 4.7 meters (15.4 feet) each year, he said. In more recent years, the rate of retreat has increased to as much as 205 meters (672 feet) annually more than 40 times as fast!

Thompson calls Quelccaya, the largest of all the tropical ice caps, the poster child for tropical glaciers. At least 70 percent of all tropical ice on the planet is trapped in Peruvian ice fields and glaciers. The annual melt from these ice packs provides drinking water and irrigation for millions of people, as well as refilling reservoirs that feed hydroelectric dams.

Thompson and his research team are in a race against time to retrieve cores from these ice caps in order to preserve the thousands of years of climatic history trapped inside. And at the top of their agenda is solving the puzzle of what occurred 5,200 years ago.

We know the climate was different then. Before that, the proportion of warm water flowing off the coast of Peru was much greater, he said, a key factor in fueling the El Nino/La Nina climate events affecting this part of the globe.

We know that the Ice Man, a preserved Neolithic hunter exposed by a retreating glacier in the European Alps, was trapped by the ice around 5,200 years ago, he said, and that had to occur very abruptly.

Earlier work by the Ohio State team on ice cores taken from Tanzanias Mount Kilimanjaro ice fields showed that a catastrophic drought had devastated the tropics around 5,200 years ago, a period of time when anthropologists believe THAT many people abandoned a nomadic lifestyle to form cities and social structures.

Those changes came abruptly and we know very little about abrupt climate change in the tropics.

If it happened in the past, it might happen again, he warned, and that type of abrupt event in todays world would mean worldwide chaos, both economically and socially. Today, 70 percent of the worlds 6.3 billion people live in the tropics.

This research is supported in part by the National Science Foundation, the Comer Foundation and Ohio State University.