Mathematicians Predict Future with Past Data 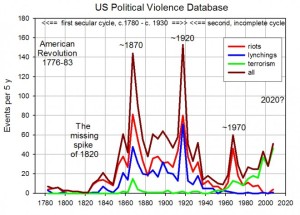 As I argued in my book, Mayan Calendar Prophecies, the Maya were not really prophets as much as they were scientists. Their “priests” were more similar to modern-day scientists and were using information about the past in order to make predictions about the future. Today we call this “forecasting” not prophecy and the only thing one needs to make accurate forecasts about the future is a large body of time-dated data over a long period of time within which to look for patterns which can then be projected into the future. The Maya had such a body of data in their historical chronicles thus there should be no surprise that they were able to make accurate predictions about the future. This technique is used in the modern science of cliodynamics. Learn more at the article below:

In Isaac Asimov’s classic science fiction saga Foundation, mathematics professor Hari Seldon predicts the future using what he calls psychohistory. Drawing on mathematical models that describe what happened in the past, he anticipates what will happen next, including the fall of the Galactic Empire.

That may seem like fanciful stuff. But Peter Turchin is turning himself into a real-life Hari Seldon — and he’s not alone.

Turchin — a professor at the University of Connecticut — is the driving force behind a field called “cliodynamics,” where scientists and mathematicians analyze history in the hopes of finding patterns they can then use to predict the future. It’s named after Clio, the Greek muse of history.

These academics have the same goals as other historians — “We start with questions that historians have asked for all of history,” Turchin says. “For example: Why do civilizations collapse?” — but they seek to answer these questions quite differently. They use math rather than mere language, and according to Turchin, the prognosis isn’t that far removed from the empire-crushing predictions laid down by Hari Seldon in the Foundation saga. Unless something changes, he says, we’re due for a wave of widespread violence in about 2020, including riots and terrorism.