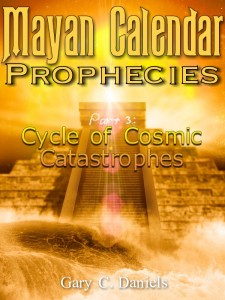 Mayan Calendar Prophecies | Part 3: Cycle of Cosmic Catastrophes takes a look at the Mayan flood myth as recorded in Temple XIX at Palenque in Chiapas, Mexico. From the book’s description:

“Mayan Calendar Prophecies (Part 3)” decodes the ancient myths of the Mayan civilization, Greeks, Hindus and Jews to get a clearer picture of the events of 3300 BC, the year the Maya recorded Earth suffered an unimaginable catastrophe. Eerily, the Mayan prophecy for the time period around 2012 referenced back to this 3300 BC event. Did the Mayan culture believe another such event was coming soon and is this why they encoded it in their 5000 year calendar cycle?

Modern astronomers have discovered that there appears to be several cycles of impact events associated with the Taurid meteor shower that occurs every year around Halloween. They have determined there are 500-year cycles, 1000-year cycles, and 3000-year cycles associated with this meteor stream. Did the Maya know of a 5000-year cycle which they encoded in their calendar and which was more devastating than any of the currently known cycles? “Mayan Calendar Prophecies (Part 3)” will explore that topic in-depth and help explain what the Mayan prophecies and myths were trying to tell us.

Note: All four parts are compiled with additional chapters in a hardcover edition entitled Mayan Calendar Prophecies: Predictions for 2012-2052 which is also available as a paperback and Kindle edition.