It seems farmers simply cannot produce enough wheat to keep up with Earth’s population explosion. All it will take is one unforeseen disaster to leave millions starving. Ominously, one Mayan 2012 prediction from their prophetic books called Chilam Balam predict a famine between the years 2022-2032. (Read about these predictions in my book, Mayan Calendar Prophecies: Predictions for 2012-2052.) The news headlines seem to support this prediction. 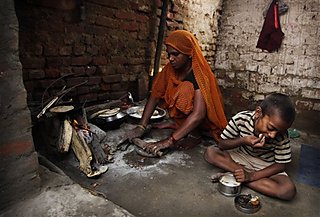 In this Saturday, Oct. 23, 2010 picture, a woman prepares chapati, a traditional bread made with wheat flour, by the fireside as her son eats a meal at their home in Allahabad, India. Agronomists say rising temperatures from global warming are reducing India’s wheat crop. Scientists say future global wheat supplies are in question because of stagnating yields, the spread of a devastating wheat fungus, climate change and a volatile, unreliable market. (AP Photo/Rajesh Kumar Singh)

In these volcanic valleys of central Mexico, on the Canadian prairie, across India’s northern plain, they sow and they reap the golden grain that has fed us since the distant dawn of farming. But along with the wheat these days comes a harvest of worry.

Yields are not keeping up with a world growing hungrier. Crops are stunted in a world grown warmer. A devastating fungus, a wheat “rust,” is spreading out of Africa, a grave threat to the food plant that covers more of the planet’s surface than any other.

In Chicago, London and other money centers, the wheat market is so roiled by bad news and speculators that rising prices may put bread out of reach for millions more of the world’s poor.

As he tended his 2 kilometer-high (mile-high) field here, where ripening grain nodded in the wind, Jose Emiglio Taboada was troubled — about a changing climate, about crop diseases, about “really, really expensive” fuel and fertilizer.

“I like growing wheat, very much. It’s a beautiful thing to do,” said this farmer and son of farmers. “But for our children to be interested in growing wheat, it has to be profitable.”

Far to the north, Rolf Penner is growing less interested.

On his 770 Manitoba hectares (1,900 acres), “I probably had 50 percent less in wheat this year than I used to,” the Canadian said. “Wheat hasn’t had the productivity gains other crops have.”

On the other side of the world, on the Punjab Plain, Indian grower Ramanjit Singh Mansaia had little choice as he readied for November’s planting. Government marketing is heavily geared toward wheat — for the naan, the chapati and the other bread staples of the Indian diet.

Mansaia is unhappy. “Global warming is increasing,” he said by cellphone from his village, Safipur Kalan.

“I used to have a very, very bumper crop, a healthy crop. Now I’m getting very, very poor performance”: 20 percent less grain, he said, as the wheat matures too quickly in rising temperatures.

The future of wheat — in many ways the future of food — was the subject of an emergency meeting of agricultural officials who flew to Rome from around the world in late September, worried over skyrocketing prices.