TheRealMayanProphecies.com » Featured, Mayan Calendar, News » Why the Maya calendar starts in 3114 BC

Why the Maya calendar starts in 3114 BC

Dr. Mike Baillie at the Queen’s University in Belfast, Ireland has made a very interesting discovery. He noticed that peaks in ammonium and nitrate in the ice core record, signatures of comet impacts with Earth, occur on or near baktun endings in the Mayan calendar. (The 13th and final baktun of the current calendar cycle ends on December 21, 2012.) This discovery suggests that the ancient Maya were aware of a cycle associated with repeated impacts of comets with Earth and that they engineered their calendar to track these cycles.

As I noted in my book Mayan Calendar Prophecies: Predictions for 2012-2052, in Temple XIX at Palenque the Maya left a record of a great flood that occurred near the end of their previous calendar cycle in 3300 BC. I interpreted this “mythical” event as a record of a real oceanic impact event that created enormous mega-tsunamis around the world. Evidence for such events has been found in both the sedimentary and ice core records. The Mayan eyewitness accounts of these events were recorded in their historical chronicles known as Chilam Balam and are consistent with an impact event with associated mega-tsunamis. Thus Dr. Baille’s research provides further evidence that supports my hypothesis that the Mayan long count calendar was designed to track a cycle of impact events which was the basis of their religious beliefs. Read his research below and decide for yourself: 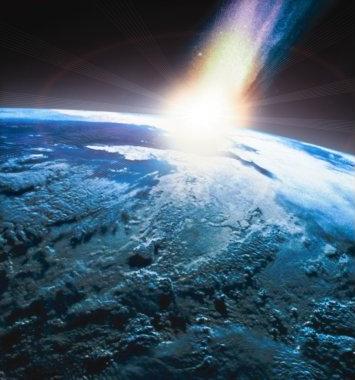 Why the Maya calendar starts in 3114 BC: a possible explanation

The 13 baktun Mayan Long Count calendar spans 3114 BC to AD 2012; each baktun being 144,000 days. The calendar was probably devised by a gifted individual or group of astronomers (hereafter GIGA) in the 1st millennium BC who chose 3114 Aug 11 (proleptic Gregorian calendar equivalent) as the start date. How or why this choice was made has long been a mystery. Evidence from the chemistry of the American GISP2 ice core may provide a simple solution. GISP2 yielded records of ammonium (NH4) and nitrate (NO3). Plotting a combined index of NH4 plus NO3 against the original GISP2 timescale (Figure 1) is a revelation. The two highest NH4/NO3 indices in some six millennia – between 4558 BC and AD 1427 – occur within a year of two baktun transitions in the Mayan calendar; namely mean ice dates 2720.4 BC cf baktun 1.0.0.0.0 (2719 BC), and 1142.8 BC cf baktun 5.0.0.0.0 (1142 BC). 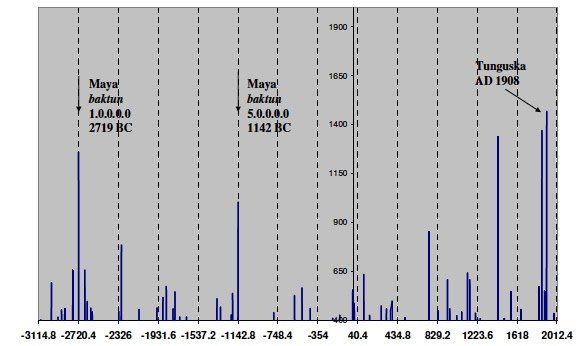 Elsewhere it has been pointed out that NH4/NO3 occurred in the GISP ice at AD 1908.48 coincident with the Tunguska impact of 30 June 1908 (Baillie 2007; Melott et al. 2010). This makes it reasonable to suggest that some real physical atmospheric phenomena (almost certainly cosmic) recorded 1577 years apart in the layer-counted ice record, may have been noticed by Maya/Olmec ancestors.

The Mayan Long Count placement may be explained by a simple mechanism, namely that people witnessing Event I (around 2720 BC) initiated a year count. Their descendants noted a repeat Event II in 1142 BC and continued counting years thereafter.

As to the choice of start day in 3114 BC: knowing that five units of 144,000 days fall between the start of the epoch and Event II (1142 BC), and knowing the number of years (n) since 1142 BC, the GIGA could arbitrarily have declared that “today we are living (5 x 144,000) + (n x 365.25) days since the start of this epoch”. Thus, the day of the year the declaration was made would determine the start date, though this could have been tweaked using other knowledge. Deciding on 13 baktuns may have been dictated by other Tzolkin/Haab considerations, by symmetry, or by 13 being a significant number.

Referring to Figure 1 there is insufficient data to decide whether any major catastrophic event is due during 2012 (when 13.0.0.0.0 occurs). However, the large ammonium/nitrate spikes circa AD 1427 and 1861 urgently require adequate explanation. Finally, all credit to the GISP2 ice-layer counters, whose efforts appear vindicated.

Data: GISP2 ice data is from The Greenland Summit Ice Cores CD-ROM. 1997. Available from the National Snow and Ice Data Center, University of Colorado at Boulder, and the World Data Center-A for Paleoclimatology, National Geophysical Data Center, Boulder, Colorado. The GISP2 NH4/NO3 indices were produced by converting raw ammonium and nitrate values to percentages of the mean of the 5 previous values in the ice core record, and adding the resulting percentages. The horizontal scale is based on means of the top and bottom ice core dates for each sample, pre-AD 1950.

Identification of a possible cosmic origin for the 2720 BC and 1142 BC NH4/NO3 spikes encourages investigation of the remainder of the Post Glacial GISP2 record. Figure 2 shows a continuation of the previous plot. 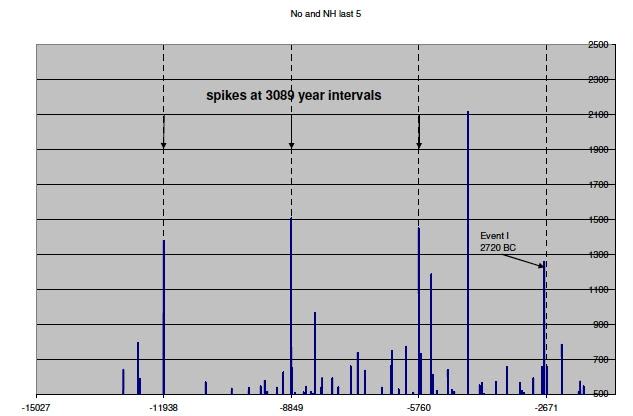 It is immediately apparent that the first three major Post Glacial NH4/NO3 spikes, at 11,938 BC, 8849 BC and 5760 BC, are spaced at 3089 year intervals. This may hint at a cosmic origin for these three peaks. It has to be noted that the 2720 BC peak is 3040 years after 5760 BC which means that an association with the preceding three cannot be ruled out. The 8849 BC spike is interesting because it is preceded in the ice by a 15cm sample showing an anomalously large NaCl signal, perhaps hinting at an ocean impact. The enormous, apparently stochastic 4559 BC NH4/NO3 deposition could span up to 4 years in the ice compared with the 3.5 months associated with Tunguska. Each of these events in the GISP2 record requires additional investigation. Unfortunately no equivalent long records are available from the European suite of ice cores, though the forthcoming NEEM Greenland chemistry record may allow confirmation of the presented events.

One Response to "Why the Maya calendar starts in 3114 BC"